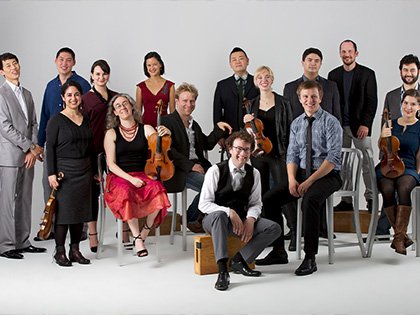 Nothing makes a relationship with a piece of art quite as intimate as committing it to memory. A Far Cry challenged itself to memorize its signature piece, Tchaikovsky’s Serenade for Strings, and it radically transformed the interpretation. The rest of the program explores the role of storytelling in relation to memory: Golijov’s Arum Dem Fayer is a traditional Yiddish folk song about the bliss of being together around a fire and was written in memory of the loss of a dear friend. Montgomery’s Banner, which is a tribute to the 200th anniversary of “The Star Spangled Banner,” delves into what it means to preserve memory while acknowledging its many contradictions. Becenti’s The Glittering World, a new commission written for A Far Cry, tells the Diné (Navajo) creation story of how the Diné people ascended through a series of mono-colored worlds into the current world we inhabit today, called “the world of many colors,” or, “the glittering world.”