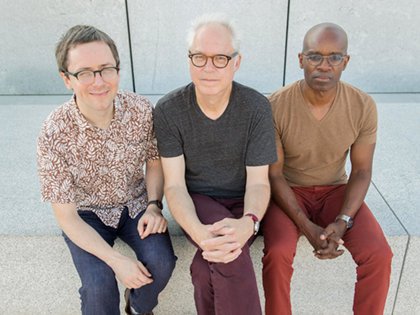 “The most brilliant and unique voice to come along in jazz guitar since Wes Montgomery.” —Stereophile

“Bill Frisell plays the guitar like Miles Davis played the trumpet: in the hands of such radical thinkers, their instruments simply become different animals. And, like Davis, Frisell loves to have a lot of legroom when he improvises–the space that terrifies others quickens his blood.” —The New Yorker

“Bill Frisell is the Clark Kent of the electric guitar. Soft-spoken and self-effacing in conversation, he apparently breathes in lungfuls of raw fire when he straps on his (guitar) . . .” —Spin Magazine

“Frisell has had a lot of practice putting high concept into a humble package.” —New York Times

Bill Frisell’s career as a guitarist and composer has spanned more than forty years and dozens of celebrated recordings, hailed by Downbeat as “the best recorded output of the decade.” Called “an unlikely guitar hero for our genre-blurring times,” by biographer Philip Watson in his 2022 release, Bill Frisell, Beautiful Dreamer: The Guitarist Who Changed the Sound of American Music, this guitar legend has created synergy among a wide variety genres: jazz, pop, folk, film music, ambient, country, classical, and more. Says Watson, “He has broken down borders, transformed the language of his instrument, and forged a panoramic and pluralist new approach to American music.”