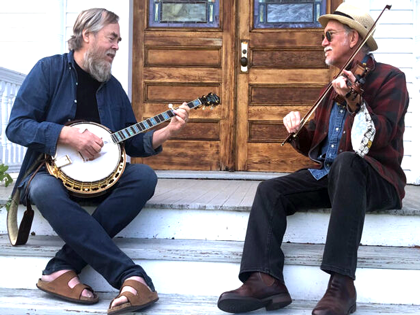 “It is no exaggeration to say that Bruce Molsky is one of the greatest American fiddlers of all time. His playing is mesmerizing and transporting, and best experienced live.” —WBUR

“[I]n fiddle- and fret-conscious circles from Nashville to Groton, Mass. … [Trischka] is known as the father of modern bluegrass.” — New York Times

Two legends of the folk/roots world—Grammy-nominated fiddler extraordinaire Bruce Molsky and banjo master Tony Trischka— join forces for an evening of old time string band wizardry. The two will trade songs from their prolific and beloved catalogs as well as the deep well of American traditional folk tunes, both well-known and recently unearthed.

Bruce Molsky transports audiences to another time and place with his authentic and personal interpretations of rarities from the Southern Appalachian songbook and other musical traditions from around the globe. Best known for his work on the fiddle, Bruce’s banjo, guitar and his distinctive, powerful vocals also resonate with listeners. His combination of technical virtuosity and relaxed conversational wit makes a concert hall feel like an intimate front porch gathering. His take on tradition has landed him in collaborations with some of the world’s most highly respected players from roots to rock. He is a special guest on legend rocker Mark Knopfler’s recent CD, “Tracker.” His “1865 Songs of Hope & Home” with Anonymous 4, was on Billboard’s top 10 for weeks. February 2022 marked the long-anticipated release of Bruce’s solo guitar recording “Everywhere You Go,” a coming-together of new interpretations and arrangements of a wide swath of styles. He holds the title of “Visiting Scholar in the American Roots Music Program” at Berklee College of Music, where he is the go-to guy for the next generation of roots musicians.

Banjo ace Tony Trischka has consistently kept his instrument and his genre on the cutting edge. The Syracuse native helped usher bluegrass out of the dusty past and into a progressive future, all while honoring the old time traditions. Trischka’s landmark solo debut, “Bluegrass Light,” was released on the Rounder label in 1974. Many other milestone albums followed, among them 1983’s “A Robot Plane Flies Over Arkansas,” which refined the eclecticism of Bluegrass Light and featured such West Coast “newgrass” royalty as violinist Darol Anger, guitarist Tony Rice, and mandolinist David Grisman. Trischka’s work with his pal Steve Martin has helped the banjo gain a wider audience and deeper understanding. His Grammy-nominated album “Double Banjo Bluegrass Spectacular,” released in 2007, and “Great Big World,” from 2014, feature Martin within a mix of veterans and up-and-coming luminaries. He produced Martin’s Grammy-nominated Rounder album from 2011, “Rare Bird Alert,” which touts performances by the Steep Canyon Rangers, Paul McCartney, and the Dixie Chicks. Trischka’s newest album, “Shall We Hope,” is a visionary exploration of Civil War history featuring an all-star cast—from Michael Daves and Maura O’Connell to the Femmes, Catherine Russell, Guy Davis, actor John Lithgow, and many others. Released in January 2021, “Shall We Hope” is a dramatized listening experience, which invites its audience into the lives of characters from America’s past as they grapple with the hard realities of war and death, and the meaning of freedom.