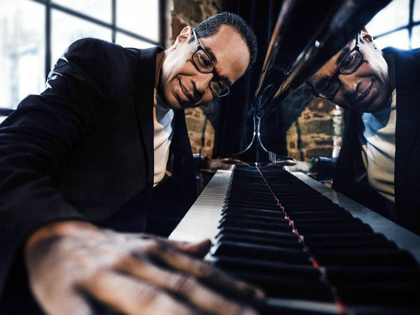 Jazz in The Concert Hall

“Danilo Pérez is a man with some serious jazz cred. The Panamanian pianist got his start playing with Dizzy Gillespie and Wayne Shorter. As a composer and bandleader, he’s practically peerless.” — NPR

As a solo artist and as a collaborator with jazz giants from Dizzy Gillespie to Wayne Shorter, for over three decades GRAMMY winning Panamanian pianist-composer Danilo Perez has been lauded as one of the most creative forces in contemporary music. With Jazz as the anchoring foundation, Perez’s Global Jazz music is a blend of Panamanian roots, Latin American folk music, West African rhythms, European impressionism – promoting music as a borderless and multidimensional bridge between all people.

Since 1993 Pérez has released twelve albums which have earned him critical acclaim, and numerous accolades around the world. He is a recipient of the United States Fellowship 2018, and the 2009 Smithsonian Legacy Award. For nearly two decades, Pérez has been part of the Wayne Shorter Quartet, alongside bassist John Patitucci and drummer Brian Blade. This latest iteration from Shorter has been known as a unique and predominant force in improvisational music both at their historic live performances and on several recordings. In 2018 Blue Note records released the highly anticipated EMANON from the Wayne Shorter Quartet which won a Grammy in the category of Best Jazz Instrumental album in 2019.