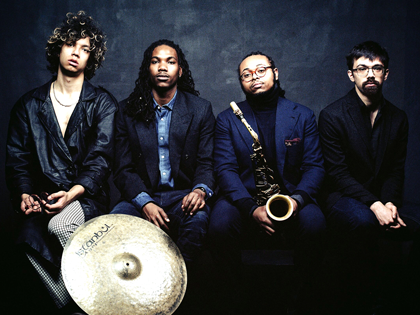 “His sound is most often silky and lush… with a gorgeous tone and phrasing… but he can shift into a grittier gospel gear or an airier whisper as the art requires.” — PopMatters.com

“… contemporary jazz at its most thrilling.”— MOJO

The music of alto saxophonist and composer Immanuel Wilkins is filled with empathy and conviction, bonding arcs of melody and lamentation to pluming gestures of space and breath. PopMatters.com says his “impulse is to bring 21st-century creative music forward and reclaim the beating heart of its past without sounding retrospective.” Listeners were introduced to this riveting sound with his acclaimed debut album Omega, which was named the #1 Jazz Album of 2020 by The New York Times. The album also introduced his remarkable quartet, which “is willing to push him and follow him, galloping into the musical adventure.”

Wilkins grew up in Upper Darby, Pennsylvania, just outside of Philadelphia. After high school, he moved to New York City in 2015 to attend The Juilliard School. In the city, he met trumpeter and composer Ambrose Akinmusire, who mentored Wilkins and helped him navigate the jazz scene. He also met a musician who would change his professional life, Jason Moran, the prominent pianist and composer who took the young saxophonist on tour. In what was one of Wilkins’ biggest gigs to date, he played alto in Moran’s “In My Mind: Monk at Town Hall, 1959,” a series of live performances honoring the great legacy of jazz pianist Thelonious Monk. Wilkins has since worked with a diverse range of artists including Solange Knowles, Gretchen Parlato, Wynton Marsalis, Gerald Clayton, Aaron Parks, and Joel Ross, making a striking appearance on the vibraphonist’s 2019 Blue Note debut KingMaker.