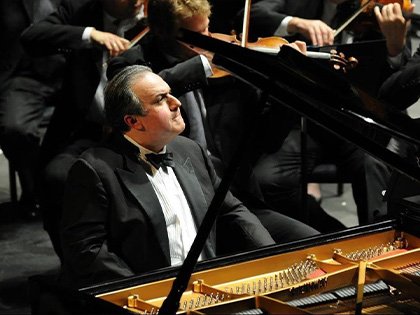 “His energy emanates from his fingers and swirls out of the piano with such perfection that every note grabs the ear with an expressive, singing quality…” — The Washington Post

The Concord Chamber Music Society will conclude their 2022-23 season with a gala performance by the acclaimed pianist Yefim Bronfman in our Concert Hall!

Yefim Bronfman stands among a handful of artists regularly sought by festivals, orchestras, conductors and recital series. His commanding technique, power and exceptional lyrical gifts are consistently acknowledged by the press and audiences alike. Following summer festival appearances in Verbier and Salzburg, his 2022/2023 season began with the opening week of the Chicago Symphony followed by return visits to New York Philharmonic, Pittsburgh, Houston, Philadelphia, New World, Pacific, Madison, New Jersey, Toronto and Montreal symphonies. In Europe he will tour with Rotterdam Philharmonic and can also be heard with Berlin Philharmonic, Bayerischer Rundfunk (Munich), Bamberg, Dresden Staatskapelle, Maggio Fiorentino, and Zurich Opera orchestras. Born in Tashkent in the Soviet Union, Bronfman immigrated to Israel with his family in 1973, where he studied with pianist Arie Vardi, head of the Rubin Academy of Music at Tel Aviv University. In the United States, he studied at The Juilliard School, Marlboro School of Music, and the Curtis Institute of Music, under Rudolf Firkusny, Leon Fleisher, and Rudolf Serkin. A recipient of the prestigious Avery Fisher Prize, one of the highest honors given to American instrumentalists, in 2010 he was further honored as the recipient of the Jean Gimbel Lane prize in piano performance from Northwestern University and in 2015 with an honorary doctorate from the Manhattan School of Music.