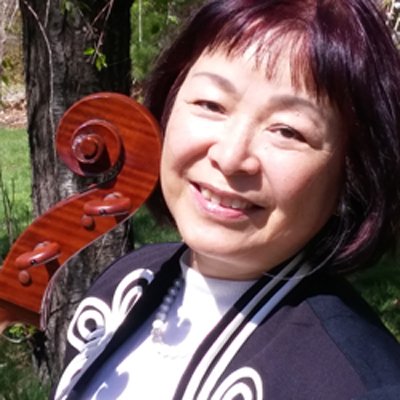 My philosophy of education is based on three elements: (1) The need of an excellent teaching environment to promote learning. (2) To create and maintain a cello studio that invites students and family to enjoy together the challenges and rewards of learning music and playing the cello. (3) All children are unique, and every day is an adventure. The promotion of musical curiosity and musicianship is my job. Let’s work together to bring musical joy to our children!

Growing up as the daughter of two accomplished music professors in Beijing, Dr. Ning Tien became one of the youngest cellists with the Chinese National Opera Company. As a student, she received top awards in the Julia Klumpky Competition, CA; the Camellia Symphony Orchestra Young Artists Competition, NY; the Beijing Young Artists Competition; as well as concerto competitions at California State University and Louisiana State University.

As a performer, Dr. Tien was co-principal cellist with the Hastings Symphony Orchestra and served five years as director of the Greater Columbus Youth String Orchestra. She founded and directed CELLOS OLE and the University Cello Choir in Columbus, GA., and served as adjudicator for the New Jersey MTNA National Solo Competition. She is also the founding member of Forte Duo, Ommagio Duo, New England Piano Trio, and founder and director of the New England Cello Ensemble. Among her other professional music engagements, Dr. Tien was a featured performer and speaker at the 2000 World Cello Congress III, Baltimore. In 2008, she presented “Contemporary Music by Tibetan and Chinese Composers” at Holy Cross College, Worcester. In 2009, she performed at the 31st Annual Bali Arts Festival in a gamelan opera “Mimpi.” In 2010, she appeared at the Forum on the Development of Chinese Ethnic Music, Beijing, China. And in 2015-16, she toured with fellow Indian Hill faculty pianist Monica Tessitore to Brazil and China with a program titled “Music from Three Continents.” Dr. Tien has also premiered and recorded contemporary works written for her: Cello Concerto by Dinos Constandinides (Recording, Vestige Label), Capriccio Himalaya by Liantao Tian and Tao Song, and Second Sonata for Cello and Piano by John Sichel (Well Spring Recording). Her CD “Music from Four Continents” is published on cdbaby.com.