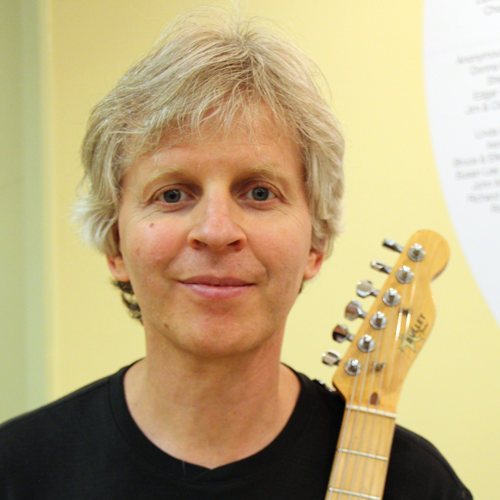 Greg describes his teaching style as “collaborative with the hope of creating mutual goals for students of all ages. Throughout the course of lessons, input, both positive and negative, from the student is greatly encouraged. In this way, it is my hope that my students can develop and enhance their individual learning while developing their own tastes in a variety of musical styles.

Multifaceted guitarist/composer Greg Passler has recorded and performed in a wide variety of styles — from experimental ambient soundscapes to acoustic jazz. As a member of the rock band Childhood, he appeared on MTV and recorded on the British record label Barracuda Blue. As part of the experimental instrumental group Magonia, he licensed an extensive music catalog for television and film, with compositions featured in dramatic, documentary and reality TV formats. Greg’s solo recordings have been featured in Guitar Player and Guitar magazines, and his latest CD release, Unframed (2014S), is an eclectic collection of his original jazz compositions performed on acoustic guitar. Along with fellow Groton Hill Music faculty member Jamie Dunphy, Greg has performed and recorded original jazz with the popular Boston-based Mill City Trio. In addition to his work at Groton Hill Music, he also teaches guitar at Groton School.