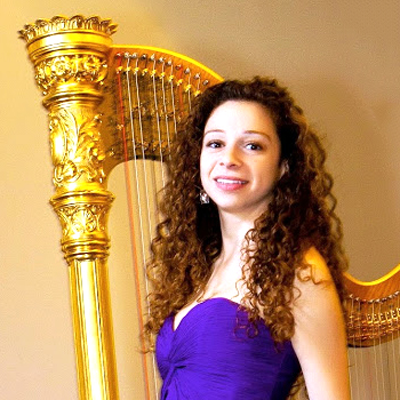 Maria teaches harp students of all ages, from beginning to advanced levels, on both lever and pedal harps. She integrates solfège, ear training, and theory into curriculum to give depth to her student’s music education.

Maria Rindenello-Parker is a prize winner in the Advanced Division of the American Harp Society’s 18th National Competition. She was also featured alongside BSO Principal Harp, Dr. Ann Hobson Pilot, on a WGBH radio program about Dr. Pilot’s groundbreaking career as a member of the Boston Symphony Orchestra and teacher. As a performer, Maria is an active freelancer in New England and a studio recording artist for film and video game scores. She served as Principal Harp with Discovery Ensemble and currently performs with Callithumpian Consort, the Cambridge Symphony Orchestra, the Amaryllis Chamber Ensemble, and other greater-Boston area ensembles. Maria has participated in the Spoleto Festival USA, the Aspen Music Festival, Monadnock Music, and the Cape Cod Chamber Music Festival. She is also a member of the Lyon & Healy/Salvi Harp Technicians Guild after a year of training at Lyon & Healy Harps in Chicago.