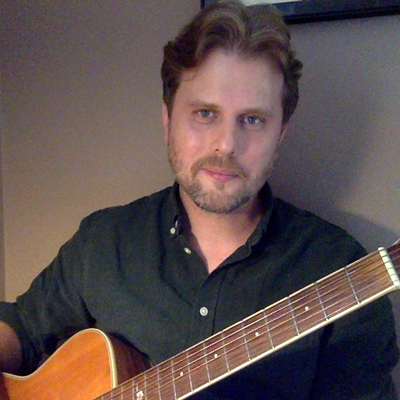 Songwriting can be both thrilling and challenging - finding just the right notes for just the right words, with just the right rhythms. Every student’s road towards musical skill building looks a little different. My primary goal is to demystify the process of songwriting for the beginner while also challenging the more experienced. As a group, we analyze songs, both old and new. We build chords and create grooves. We look at elements of storytelling, poetic technique, and lyric form. I strive to hear each student’s work on its own terms and to create a welcoming space that makes creative work and lively collaboration possible.

As an educator, Scott Murphy has served as a teaching artist for Lincoln Center Theater’s Songwriting in Schools Program (2007-2015) and has taught songwriting workshops at colleges and universities around the country, including Connecticut College, Columbia, NYU, Sarah Lawrence College, UW-Madison, and Wesleyan. In addition to Groton Hill, he is currently a faculty member with the Eugene O’Neill Theater Center’s National Theater Institute.

As a composer/lyricist, Scott is a recipient of the Richard Rodgers award, the Jonathan Larson award, the Dramatist Guild Fellowship, and the Rhinebeck Writers Retreat. He was selected by the late Stephen Sondheim to receive the Garson/Kanin award from the Theatre Hall of Fame. With collaborator Nathan Christensen, Scott wrote the musical Broadcast, workshopped at Playwrights Horizons, the Eugene O’Neill Theater Center’s National Musical Theater Conference, and 11th Hour Theatre Company. The two also wrote The Giver, a musical adaptation of Lois Lowry’s novel, seen at National Alliance for Musical Theatre, Theatreworks Palo Alto, The Village Theatre, College of the Canyons, and Pennsylvania’s Festival of the Arts, commissioned by TheatreWorksUSA.