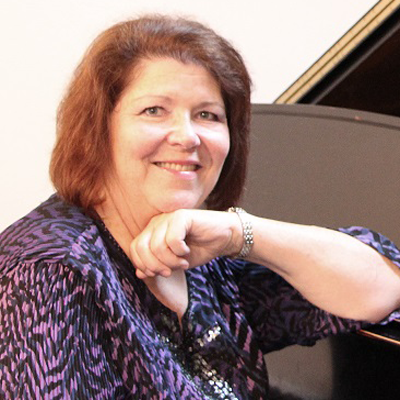 Susan enjoys teaching classical and contemporary music styles with an emphasis on healthy technique, interpretation/dramatic sincerity, and musicality. She is adept at identifying and solving vocal issues, and helping students achieve their musical goals. Her teaching style empowers students by helping them understand how their instrument works, through multiple learning modalities, such as cognitive, visual, aural, emotional and kinesthetic awareness. She employs strategies from well-researched vocal pedagogies and from her own teaching experience of over 30 years. Susan’s voice studio is inclusive of children through senior citizens, and beginners through professionals. Many of her middle school and high school students have been accepted into District, All-State and All-Eastern Honor Choirs, and a number of her students have been accepted into Conservatories and University music and theatre programs, such as Boston Conservatory, Ithaca College, Oberlin Conservatory, New York University, the UMASS system, Montclair State University, and the Hartt School of Music.

Susan Bonito is an active teacher, performer, and director/producer. Her professional credits include multiple solo appearances with the San Francisco Symphony, the Fairbanks Summer Arts Festival, Music from Bear Valley, Assabet Valley Mastersingers, Claflin Hill Symphony, and The Orchestra of Indian Hill, to name a few. Susan has been honored to share the stage as a soloist with world-class conductors and musicians, such as Robert Shaw, Edo de Waart, Herbert Blomstedt, Neeme Järvi, Michael Tilson Thomas, Dave Brubeck, and Steve Reich. Her recordings include two Grammy-winning CDs with the San Francisco Symphony and Chorus, and the film soundtrack for Godfather, Part III, with Carmine Coppola conducting. Susan’s professional affiliations include the National Association of Teachers of Singing (NATS), the American Guild of Musical Artists (AGMA), the American Choral Director’s Association (ACDA), and the Somatic VoiceworkTM Teacher’s Association. She was the founding director and producer of Indian Hill’s Children’s Musical Theatre program for 10 years, former co-director of the Indian Hill Threshold Singers, and founding director of the Intergenerational Choir. Susan has taught the vocal curriculum for the SummerDayMusic program and created the popular Show Choir elective for that program. She is also Music Director for the United Parish of Upton.