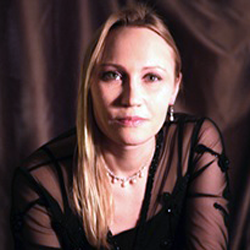 My main approach to teaching music and performance is patience, building on the innate strengths of each student, and striving for perfect execution. I use an approach that integrates many different aspects of music-making. This results in the most effective piano-learning approach with ease and joy in all age groups. The main focus is to learn music from the music itself. My job is to uncover and strengthen every student’s potential and to guide him/her through the process of matching his/her performance level to these potentials … and beyond. I enjoy working with all ages (including adult beginners and continuing adult students). Besides building a solid musical foundation and piano skills, my students will learn improvisation, playing by sight, accompanying, and theory at the piano.

Born in St. Petersburg, Russia, the daughter of a guitar craftsman and an aeronautical engineer, Tatiana Kolossova Bercu became an accomplished pianist by age 12. At 16 she was working at the Leningrad Concert Company as an accompanist and stage performer. She then held the position of Music Director at the Leningrad Film Company and two of St. Petersburg’s leading theaters. After completing her musical education, Tatiana set off to share her musical talents in the United States. In 1991, she arrived on an exchange program to serve as Music Director for Boston University’s theater company and remained to study at the Longy School of Music. Today she is an active pianist and organist in the New England region and a founding member of the River Rose chamber music ensemble.