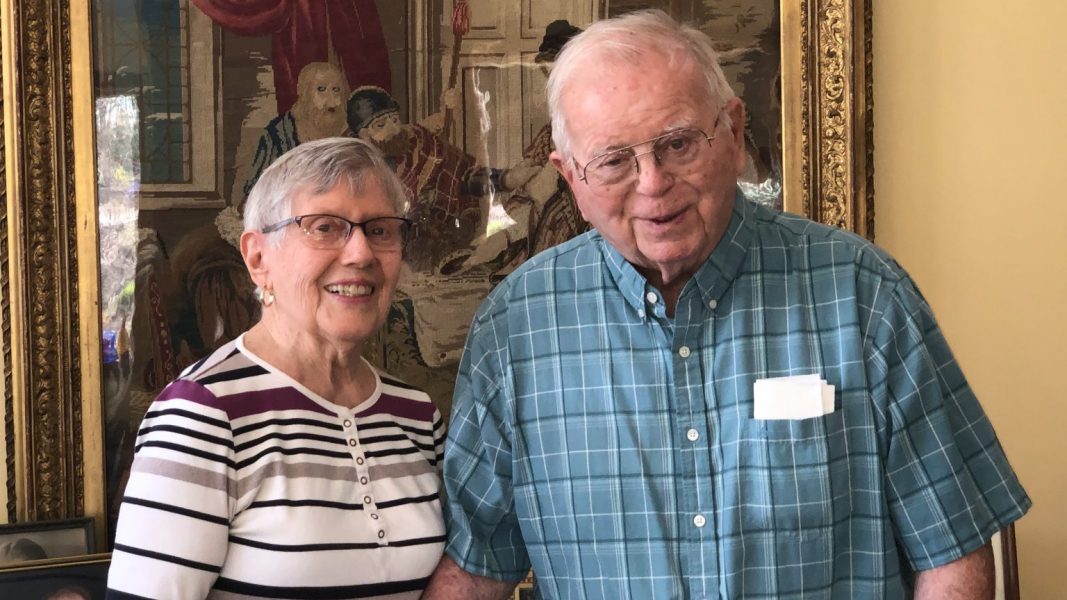 Dorothy (Dot) and Henry Woodle are long-time Groton residents and founders of Groton Ayer Realty Trust, which owns several industrial properties in the area. They have been Indian Hill Music business partners for 25 years and generous sponsors of our public school outreach programs. Our Director of Development, Catherine Coleman, sat down with the couple recently to learn more about their history with Indian Hill and their passion for the orchestra and music education.

How did the two of you meet, and how long have you lived in Groton?

Henry: We live on a cove on Lost Lake in Groton. My father bought property and built a cabin here when he was 18 years old in 1923, so our family has been here for nearly 100 years! Dot’s family arrived in the 1930’s. Our extended families and close friends all grew up together during the summers and created a year-round community where many of us still reside.

Dot:  We met when I was 7 years old and Henry was 10. We recently celebrated our 60th wedding anniversary.

How did you get involved with Indian Hill Music?

Henry: We were first introduced to the organization through Orchestra of Indian Hill concerts when the symphony performed at Groton Middle School and at the former school across from Emerson Hospital. We used to go to the BSO in Boston in the 1970’s, but we found a gem here.

Dot:  We enjoyed it then and still do. It’s a lot easier to attend the Orchestra of Indian Hill than picking up and going into Boston!  We have introduced close friends to the orchestra, including Carole and Art Prest when they moved to Groton [Carole has served on Indian Hill’s Board of Directors for 9 years].  Art and Henry had grown up together on the lake.

Are either of you musicians?

Dot: As a child I had piano lessons for a number of years. Later, I was in my high school band. I really wanted to play the trombone but my father said that wasn’t lady-like, so he let me play percussion instead! I always sang in the chorus in school and, as an adult, in the Acton Community Chorus, the Groton Community Chorus, and for many years, the Nashoba Valley Chorale.

Henry: My father played the piano and saxophone and bought a Wurlitzer organ that he played, too. We were brought up with music, classical for the most part. I was a failure at piano playing, but I love music!  When stereophonics came along, we got a Fisher stereo and our family would listen to the classical station WCRB on the radio.

What particularly attracted you to our educational outreach programs in the schools? Why was that important?

Henry: We wanted to help the community and became involved with Indian Hill as a business partner (Groton Ayer Realty Trust). That was a way of supporting your education programs in Ayer Shirley without advertising it personally. We thought that if the students saw Indian Hill musicians making music, they would appreciate it and maybe be inspired to try it themselves. To me, Indian Hill is a jewel. I mean that sincerely.

Dot:  It’s really great to allow young people who would otherwise not have any connection to music, to experience it and grow with it, if they are inclined. It gives them an opportunity that they might never have — if the kids don’t have an opportunity to learn and play music, they’ll never know.  Also, many young people don’t hear much classical music in their day-to-day lives.

You have watched Indian Hill Music grow up in a way.  What do you think about the amazing music center we are creating?

Henry:  Your new facility is a landmark venture. And is going to serve you very well.

Dot:  The impressive part is that Indian Hill had a vision and direction and everybody is working together to accomplish great things! It’s wonderful that Indian Hill Music was able to take advantage of this opportunity.

We are thankful to the Woodles for their steadfast support, and can’t wait to welcome them to the new center!

For information on becoming a business partner of Indian Hill Music, or sponsoring one of our programs, contact Catherine Coleman, Director of Development at ccoleman@grotonhill.org.