Deborah and Terry O’Kelly of Carlisle, owners of Golden Girl Granola, are local business owners and music fans who have connected to community through volunteering at Groton Hill for over 15 years. They took a few minutes to chat with us at their Shirley, MA headquarters about volunteering, their musical family, and their growing granola biz!

How did you get involved at Groton Hill (then Indian Hill)?

Our daughters, Jackie and Catherine, were both students in Indian Hill ensembles. Jackie played trombone, and Catherine played oboe in a chamber ensemble and took lessons. Catherine eventually made music her profession – but as a classical guitarist rather than an oboe player! She plays locally in the Tedesco Duo (guitar and flute) and teaches at Rivers Conservatory, Powers Music School, and Dana Hall.

How did Golden Girl Granola get its start?

Deborah: Golden Girl Granola started in July of 2007. At that time, our girls were college age, looking for ways to earn money during the summer. Catherine wanted to make and sell bags at the farmers market. When we visited the market and saw that it was mostly food, she and Jackie decided instead to make tiny little handcrafted donuts. 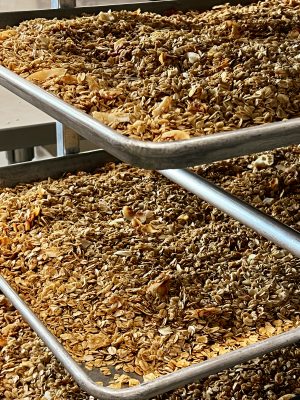 Terry: They were delicious, but after several hours, they were like lead weights!

Deborah:  So Jackie began to research and experiment with other products that would have a longer shelf life. She tried all kinds of combinations of granola and named it “Golden Girl Granola,” with a blonde Pippi Longstocking logo that she drew to represent her with her blonde hair.

Every weekend after that, the granola sold out at the farmers market. When it was time for the girls to go to school, we were left with an empty nest. I continued the business when I kept getting phone calls from local folks asking where they could buy the granola.

It really just happened at the right time for me. I wanted to have my own food business in my 20’s and I say now that I didn’t have the know how. Now I realize that nobody really knows how to do anything until they do it.

I moved the business to a shared commercial kitchen in Chelmsford in order to be able to sell to stores, and then we moved again several years ago to our current kitchen at Phoenix Park in Shirley. As of 2011, we were baking and selling 52 pies, 300 scones, and granola at nine different farmers markets and Whole Foods Markets. We did hundreds of in-store demos and met lots of new customers. Meeting people spurs you on and inspires you to continue.

When did you get involved in the business, Terry?

Terry: I had worked at various data storage companies – BASF, then Kodak, Memorex, and Netscout. I retired six years ago and went to work full time at Golden Girl as an indentured servant (they chuckle).

Why do you volunteer at Groton Hill Music Center? 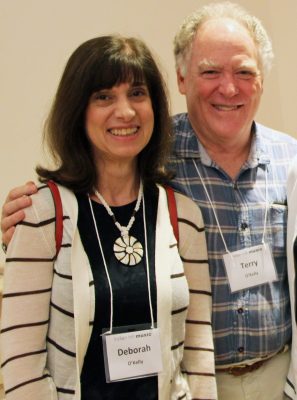 Deborah: We love the community, and enjoy the concerts. It’s a great way to give back to the community in a way that feels good to us.

Terry: Plus we are friends with the other volunteers. We all work together. It’s fun just to be involved in something. For example, if you bring something you’ve made to a party, you’re more invested in it, and enjoy it more. It’s the same for us with volunteering at concerts. We enjoy the experience even more because we are invested in it. We get more out of it.

The thing we missed the most during the pandemic — and one of the best things about volunteering at and attending the orchestra concerts — was the talk that Bruce gives at every concert. It is really, really wonderful to learn what to listen for in the music, so during the concert you know how things fit, you understand it a lot better. The experience is educational, inspirational, and artistically satisfying.

What’s next for you both?

Terry: During the pandemic, we did a lot of online orders — offering free shipping to help make it easier and more affordable for those who were struggling. We are continuing our online sales and expanding into more stores. We are now in stores in New Jersey, Maryland, and Virginia. You can also find us in Whole Foods, Verrill Farm, Donelans, Roche Brothers, Hannaford, and a lot of small local farms, like Crescent Ridge.

Deborah: We are also looking forward to volunteering at the new Groton Hill Music Center! I have also taken up ballroom dancing, and have my first dance showcase. Our daughter Catherine will be playing at that with her duo. So again, I’ll say you don’t have to know how to do something – If you want to do it, just do it!

Say hello to Deborah and Terry when you see them volunteering at upcoming concerts! And don’t forget their granola on your next local shopping trip. It is absolutely delicious!  Learn more at goldengirlgranola.com.